A few years ago, there was a film called The Raid (or The Raid: Redemption, as it was titled here in the States due to copyright issues). The film took place primarily in a 30-floor tenement building, every square inch of which was coated ankle-deep in the shit that got kicked out of so many characters. Needless to say, it was a huge international hit with arthouse filmgoers and kung-fu fanatics alike.

And the people who made Dredd, apparently.

So when word came of an American remake in development, the fans replied with a shrug and basically said “Sure, why not?” But when the crew of the original got to work on a sequel, there was a unanimous “FUCK YEAH!” heard around the internet. Then the sequel came out, and critics were tripping over themselves to sing the film’s praises. “The greatest action film ever made,” they said. “Gareth Evans set the bar so high that action filmmakers will be trying for years to reach it,” they said.

Sadly, I’m afraid I must disagree. This film doesn’t reinvent the action genre, and it doesn’t even come close to matching the fight/screen time ratio of the previous film. That said, The Raid 2 is still a fucking awesome movie. It’s just awesome in a totally different way.

See, the plot of the first film was so simple that it bordered on non-existent: There’s a tenement building populated entirely by violent criminals and drug-dealers, and a SWAT team has to fight its way up to the top floor to confront the kingpin. I’ve heard the premise compared to video games, but that would be an insult to modern-day video games. However, the sequel is an entirely different beast.

As the sequel opens, we learn that the tenement building was part of a larger game between two criminal families. Bangun (Tio Pakusodewo) and Goto (Ken’ichi Endo) spent years warring with each other until they settled their differences to end the bloodshed. They divided up Jakarta about ten years ago, and things have been more or less stable in the time since, but the truce has not been an easy one. Foreign gangs have been trying to make headway into Jakarta, and local criminals (such as Bejo, played by Alex Abbad) have been making trouble as well. But the biggest problems come from Uco (Arifin Putra), the son and heir of Bangun. Where Bangun is eager to placate his enemies for the sake of keeping power and avoiding violence, Uco is a hothead who’s ashamed to see his father grow senile and impotent. Moreover, Uco is overly eager to make a name for himself and grows impatient to take the family throne.

On the other hand, both families have hired police officers to help enforce the status quo. That’s where our hero comes in.

After the events of the previous film, Rama (played once again by Iko Uwais) is recruited to help find crooked police officers in the ranks of Jakarta law enforcement. To do this, he’s sent undercover to befriend Uco, working his way into the Bangun crime family to see which cops they have on the payroll.

Right off the bat, you should notice that this premise bears absolutely no resemblance to the previous film. But that’s not necessarily a bad thing. The last film held tension by showing an elite police squad get picked off one by one as they went deeper and deeper into a nest of armed psychopaths. This film shows tension by way of a fragile undercover operation, made even more volatile by all the shifting allegiances and agendas around Rama. Additionally, the last film only concerned an apartment building; in this movie, the fate of a city is at stake.

Both films do a perfectly good job of building and maintaining tension. However, the sequel uses tension that’s much more dependent on diplomacy and espionage. This means that there are huge stretches of the film without any fight scenes, nothing at all like the relentless nonstop action of the first film.

That said, when this film gets down to it and delivers a fight scene, it does not disappoint. The fight scenes are all choreographed and shot with the speed, creativity, and unflinching brutality that made the previous entry so notorious. The sequel even ups the ante with some very creative weaponry and scenes that would not have been possible in the confined space of the last film’s apartment building. To wit, the previous movie could never have had any car chases. ‘Nuff said. 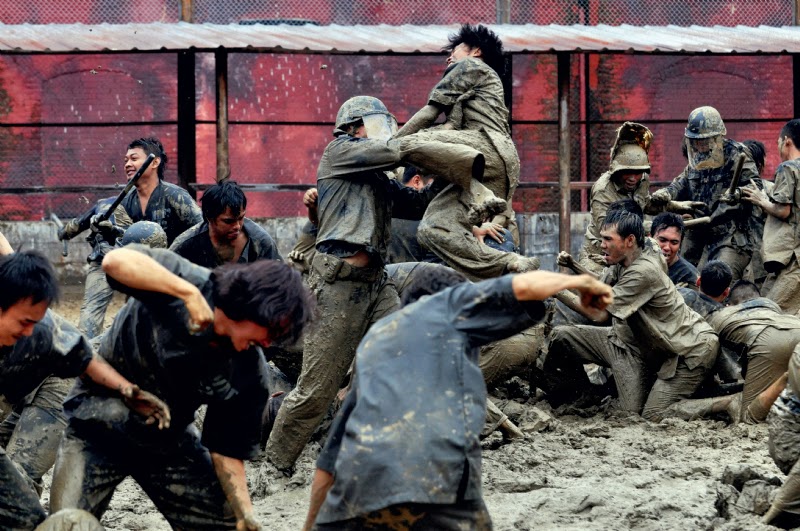 Picture all this mayhem filmed in a single take.

Then we have the cast. All the actors play their parts quite serviceably, though their performances are greatly assisted by some very convincing SFX carnage. That said, two actors merit particular mention.

The first, of course, is Iko Uwais. To be clear, Gareth Evans (not to be confused with Gareth Edwards, director of the upcoming Godzilla remake) deserves no shortage of credit for staging the fight scenes in such a fantastic way. That said, as the star of the film and choreographer of the fight sequences, Uwais proves himself a powerhouse talent a thousand times over. For the second time.

Uwais is a bona fide badass, delivering lengthy fight sequences full of punches and kicks so fast that I could swear the camera wasn’t able to film them all. Yet that’s not what makes him a truly great action star. No, what really makes him a superstar is his vulnerability.

I realize how crazy that sounds, for a man to seem vulnerable when he can take endless stabbings, slicings, beatings, and bullet wounds, but that’s only when the fight scenes are going on. When the fights are over and the adrenaline’s worn off, Uwais makes us feel every limp and bruise. Though he may fight like a demigod, he never looks or acts like one. It’s a tricky balancing act to pull off, but Uwais makes it look effortless, which makes his character all the more sympathetic and easy to cheer for. It’s the same reason why Jackie Chan is a legend, and that’s not a comparison I would take back. With these movies, Iko Uwais has more than earned recognition as an A-list world-class action legend, and I’ll hear no argument to the contrary.

Pictured: Yayan Ruhian on the left, Iko Uwais on the right

Then we have the matter of Yayan Ruhian, another cast member to make the leap between films. The twist, however, is that Ruhian’s character in the last movie was killed off and he’s playing an entirely different character in this outing. I have no idea why, especially since no effort was made to make his characters look different in any way. Then again, Ruhian has such a distinctively gaunt look that any attempt at disguising him would likely have failed. It’s not that Ruhian does a bad job — indeed, he plays his character with a certain nobility and a love of family that neatly parallels the protagonist — I just have no idea why he was cast.

For miscellaneous notes, I liked the film’s themes of ambition and arrogance. They were delivered nicely, giving the characters a sense of morality without distracting from the narrative or the action. There’s also the theme of family ties, which was very poignant without being oversold, especially in Rama’s case. Finally, I’m sorry to say that the score in this movie wasn’t nearly as effective as it was last time. Then again, as I’ve already implied, Joseph Trapanese was composing music for a completely different picture.

There’s not much more to say about The Raid 2, since the film speaks pretty darn loudly for itself. Though this movie doesn’t have anywhere near as much action as the last entry, the sequel more than makes up for it with wall-to-wall political intrigue and espionage thrills. And when this movie does deliver action, it makes your average “Street Fighter” game look like a round of “Patty Cake.”