Before we get to the picks, Jesse and I thought we’d have a little fun…first up, our favorite cheerleader pics from the season:

Jesse: I think several people would be surprised to know that this column consists of things other than cheerleader photos, but it’s true! However, we wanted to take a fond look back at the cheerleaders featured in this column. There were several cheerleaders who I felt perfectly represented their teams, such as the Broncos cheerleader who was as sleek as Denver’s offense, or the Panthers cheerleader gutting it out in the rain, much like the gritty gutty grittiness of Carolina’s 2013 campaign. In the end, I had to go with the cheerleader who best represented everything about her franchise. Congratulations, Not-Very-Enthusiastic Jaguars Cheerleader!

As your prize, Ms. Jag, I give you the 800th and final screening of the finest moment in Jacksonville Jaguars history.

Next, our best and worst picks of the season:

Jesse: My picks this season ranged from terrible to slightly-less-terrible, and Tom whomped me in the regular season. However, I finally got one right in the playoffs:

I’m still not convinced that Ron Rivera can out coach Jim Harbaugh, or that Cam Newton has an answer for San Fran’s pass rush. The two best teams in the NFC are Seattle and San Francisco, period. San Francisco in a cakewalk, but keep in mind: I’m an idiot.

Not that time! Newton was intercepted twice and sacked 4 times in a 23-10 loss.

My worst pick isn’t a pick so much as a statement about a coach early in the season, previewing Week 3:

The Giants have looked lousy in their first couple of games, and I can think of no better cure for what ails them than playing a team coached by Ron Rivera. You may recognize Rivera as the statue who is planted in the ground on the Panthers sidelines during all of their games. Many coaches are often blank slates on the sidelines, but for every Tom Landry and Bill Belichick, there are dozens of Art Shells. Rivera firmly belongs in the Shell category, his every coaching decision a different way of saying “I’m afraid I’ll lose my job.” It sucks to see a talent as dynamic as Cam Newton playing for such a boring, innovation-free coach.”

Within a couple of weeks, Rivera was known as “Riverboat Ron” and the Panthers were on their way to playing in the NFC Championship. This week, Rivera signed a three-year extension. I am dumb.

Tom: I’ll start with, having seen how things played out, probably the worst pick I made this season–from Week 4:

Miami vs. New Orleans: We make references to folks on the message boards here, and I’d like to point out Duke Fleed as one of them. He is a die-hard Dolphins fan, and has a unique way of punning his way through a forum post. In his honor, I continue riding the Dolphins train all the way up the Tanne..HILL to victory.

But just a week later, I redeemed myself with this pick:

Seattle at Indianapolis:  The Colts shocked everyone by whipping the 49ers and now they get the team that whipped the 49ers the week prior. Seattle went to Houston and almost lost, and now they travel to Indy. It just seems like they have to catch up to the West Coast time before they start playing. Luck has to get hot early and the defense has to frustrate Wilson in the process. Strictly because it is an away game and I almost got burned last week, I’ll see if I can get “Luck-y” this week…and I promise to quit using that term. Eventually.

And finally, our opinion of each other’s best and worst picks of the season:

Jesse:  Overall, you beat me this season. Rather than praise you further, I’m going to stomp off the field in a huff, like Jim Schwartz:

Tom: I will agree with Jesse, I beat him this season.

And now, what you all came here for:

Jesse: It’s been a pleasure doing this column for CHUD this NFL season. Not only did I get to peruse through a lot of cheerleader photos, I also engaged in some fun conversations with fellow football fans. It’s been quite a season, but it ends in a way that many predicted, with the two best teams in football facing off. I keep returning to this stat: This is the 16th time that the defense that allowed the fewest points in the NFL has made the Super Bowl since the merger. The previous 15 teams went 12-3 in those Super Bowls.

I’m rooting for Peyton Manning, and it would be incredible to see him come back and win one more ring.I hope it happens. In the end, Seattle’s defense will prove too tough, and will make one more play to win a close, close Super Bowl.

Have a great 2014 everyone, and may Hoyer The Destroyer watch over you all: 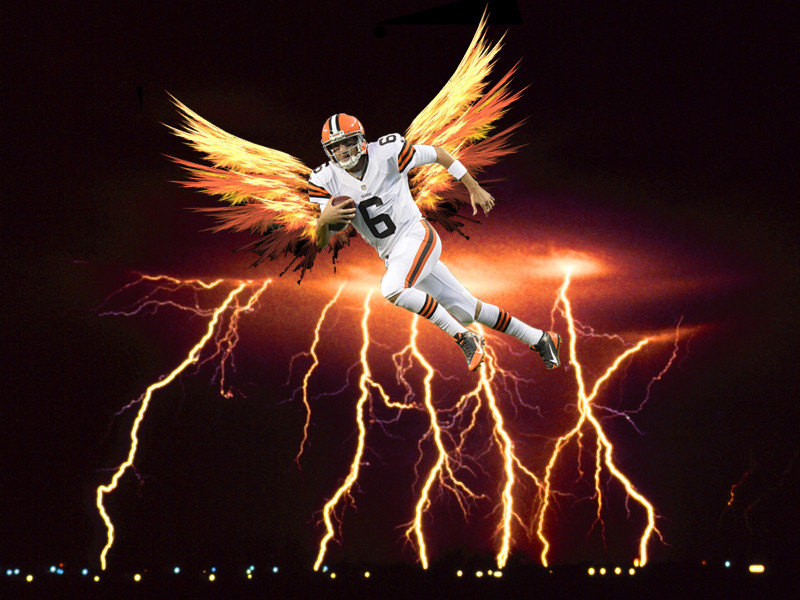 Tom: This was season 2 for me of doing this, and Jesse did a great job helping out this season, and nothing screams great partner for a Steelers fan than a Browns fan. And we both had a roller coaster of a season for our respective teams–one started up, the other down, and then eventually they passed each other and ended with one missing the playoffs by a FG from another team, and the other hiring yet another head coach. But many thanks to Jesse for hanging in there and to continuing to be a (good-natured) Browns fan. And many thanks to you guys out there that read the column. Now, on to the important part.

The NFC West is 0-4 in the “big game” ever since St. Louis and the Greatest Show on Turf won in 1999. However, in a strange twist, the 0-4 accounts for all 4 NFC West teams–Rams (2001), Seahawks (2005), Cardinals (2008), and 49ers (2012). So it’s safe to say the NFC West is probably one of the best divisions in the NFL in the past decade. Also oddly ironic is that this Super Bowl literally has the best offense in the NFL facing off against the best defense. My adage is, when in doubt, go with the defense (or the team with the most HGH). Peyton Manning has been rumored to be possibly done after this game, win or lose. He has stated that he wants to continue playing, but medical exams may show differently. And as much as he hates to hear it, when the weather gets cold, he seems to slow down a bit on the field. And let’s talk about this Super Bowl–in New Jersey, in February. However, the weather gods may be looking down upon the game as it’s being predicted it will be clear with a high of 40, which greatly disappoints me.

Going back to defenses, I read a statistic the other day about Seattle’s secondary and that they’re intercepting something like almost 20% of every pass thrown. And Peyton throws a lot. But Seattle has been proven beatable away from home (and even once at home this season), and this is not only a neutral site, it’s on the east coast. And in addition, this is a picks column, and being one game ahead of Jesse in the playoffs, I’m playing with house money at the moment, so you know what? I predict the sheriff rolls in and shows those Seahawks who runs this one horse town (and that horse is a Bronco).

Thanks again for reading, and enjoy your Super Bowl snacks, D.T.