Tom: Houston was way out in front of New England, but the Pats just flipped to their “How to beat Peyton Manning” Playbook and came back and won. Now a team that’s circling the toilet waiting to be flushed plays a team that probably should have been flushed back in week 6. However, the Jags are on a bit of roll…at least a roll in the Jags eyes. Sure, why not take them again?

Jesse: As you can see, my record is slowly catching up with Tom’s, in part because I’ve wisely picked the Jags during their current winning streak. However, I think the Texans are too proud to be swept by Jacksonville, and will bumble their way to victory during another excruciating Thursday night snoozefest. (Speaking of which, this article on Thursday night games is a handy reminder that whenever Roger Goodell tells you that he cares about safety, he’s not telling you the truth.)
Texans

Jesse: The staggering Colts righted the ship a bit last week by beating the Titans. Unfortunately, the Bengals aren’t the Titans, what with their competence and ability to win. I think the Bengals are eager to clinch the division.
Bengals

Tom: The Colts have suddenly taken to playing games a lot closer than they probably should be, and the Bengals are on the precipice of taking the AFC North. Normally I would say that it’s time for Cincy to lose an important game like this, but being at home, I think they’ll pull through.

Tom: Somehow, some way, the Falcons were able to win “in” Buffalo (aka Toronto) after a bout of fumblitis overcame the Bills receivers. Matt Flynn is the still the QB in Green Bay, but Rodgers isn’t on the inactive list this week. But I seriously doubt he’ll play. Even with Flynn at QB, with their defensive issues and this being in the frozen tundra, I don’t know if Atlanta can pull it out two weeks in a row. Or maybe they should just move the franchise to Canada.

Jesse: I thought Matt Flynn might provide a spark for the Packers on Thanksgiving. I was very, very wrong. However, I’m not convinced that the Falcons can win at Lambeau.
Packers

Jesse: If the Browns weren’t playing New England, I’d pick them solely because Brandon Weeden won’t be playing quarterback. Unfortunately, they’re playing at Foxboro. This will be a slaughter.
Patriots

Tom: Welcome Caleb Hanie (who’s name sounds like an old prospector) to the Browns! And just in time to play the Patriots! In New England! Hurray!

Tom: “He Hate Me” game of the week. Jets, you have disappointed me for the last time.

Jesse: Lord, what an awful game. In the immortal words of Jay Cutler, “DOOOOOOON’T CARRRRRRRRRE.” By the way, the Ed Reed signing is Rex Ryan at his best. The Jets sign him, Rex does his usual tough-guy bluster thing (“He’ll be a great signing for us”), and Reed turns out to be completely washed up. The Rex Ryan Era: Stupid, but never boring.
Raiders

Jesse: The Lions are a bunch of loud dumb jerks. How’s that for expert analysis?
Eagles

Tom: The Lions are feeling pretty good about themselves after dismantling the Packers on Thanksgiving. So of course that means they’ll lose this week.

Tom: So I figure I’m in good shape here no matter what happens–every time I seem to pick the ‘phins, they lose, so that means Pittsburgh will win another one. But who knows. Meanwhile, Tomlin is $100k lighter in his wallet, and there is still talk of draft picks being taken from the Steelers. Which is ridiculous. Alosi was suspended from the Jets when he purposely stuck a leg out to try and trip a player, but no draft picks were even discussed being taken. Goodell seems to have the attitude of, if there is an unprecedented type of infraction by a team/player, then by the ghost of Lombardi, I need to come up with the most extreme punishment possible. I had suggested that they suspend Tomlin the rest of the season (which didn’t even happen to Belichick after Spygate). But what do I know–apparently not as much as the all-knowing, all-seeing commish.

Jesse: Nothing excites Roger Goodell more than handing out draconian punishments over petty, stupid stuff. He’s like the guy in Kentucky Fried Movie who orders a man’s decapitation, then says “Take him to be tortured!” Ultimately, the only thing we’ll remember about the Tomlin incident are the gifs. Aside from that, this is a huge game for the AFC playoff race, and I don’t think the Dolphins can win on the road.
Steelers

Jesse: In the first couple of weeks of the season, E.J. Manuel seemed to be well on his way to being the Offensive Rookie of the Year. In the last month, would you believe that Mike Glennon has become the front-runner? Schiano’s commitment to Glennon is a prime reason why Schiano will likely be back next year, and the Bucs are playing all-out for the guy. I predict another victory for Tiny Hitler this week.
Bucs

Tom: The last time these two QBs met, Glennon orchestrated an improbable comeback victory for NC State over FSU that gave the Seminoles their first of two losses in 2012. Now today, Manuel is running his team as a first round pick, while Glennon inherited the job after the original QB went nutty. What does all this mean? Well, nothing, really. Glennon may have a new coach next year if they can’t keep winning out. And Buffalo is so up and down–like the incredible collapse last week in Toronto–it’s hard to trust them. But I think I will one more week.

Jesse: This game will be such a blowout, I predict the announcers will start talking nonstop about the RGIII/Shanahan relationship early in the third quarter.
Chiefs

Jesse: The Brian Billick Bowl promises to be a massacre. The Ravens still have something to play for, they’re at home, and Minnesota doesn’t have a quarterback. Leslie Frazier’s stare promises to be blanker than usual.
Ravens

Tom: It’s the great purple out! On you, it looks good! Really! So Matt Cassel is the savior (again) of the Vikings? Nah, not really.

Tom: Peyton loves to show off for Tennessee. Even if he’s not playing in Knoxville anymore.

Jesse: Peyton Manning has never won a game where the temp was below 20 degrees. The predicted temp for kickoff this week is 15 degrees. The Broncos will win handily, making this dumb stat obsolete.
Broncos

Jesse: I was convinced the Fighting Fishers would put in their yearly great performance up last week against the Niners. I was wrong. Apparently, the Rams peaked this season with that blowout win against the Colts. Carson Palmer will be the best QB on the field during this game . . . and that’s sad.
Cardinals

Tom: Well, the Cards let me down last week. Got too far in a hole and couldn’t come back. The Rams didn’t even make it a game against the 49ers, and since we’re in Arizona, I’ll try the Cardinals again.

Tom: *whack whack whack* That sound you hear is the beating of the “swapped draft picks” horse. And the Giants still think they’re going to the playoffs.

Jesse: Eli faces off against the team which originally drafted him, a team he ended up spurning for reasons he can’t even remember. Look for the announcers of this game to talk about that a lot, even though it doesn’t matter. Chargers should win handily.
Chargers 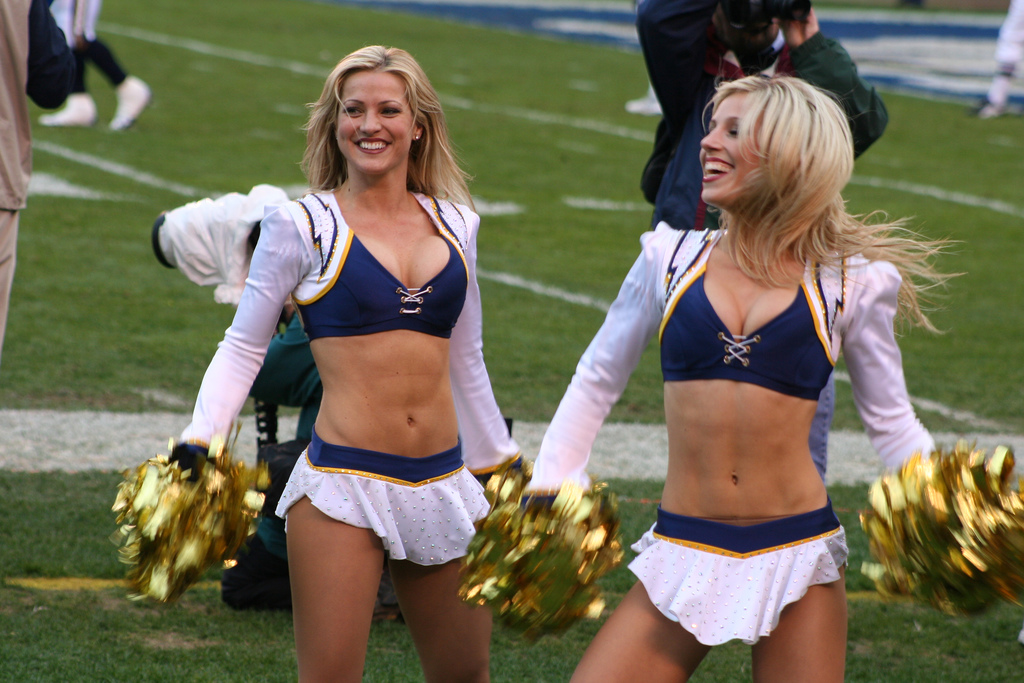 Jesse: Barring a total collapse that won’t happen, Seattle is looking at home-field advantage throughout the playoffs, which I think renders them as close to unbeatable as you can get in today’s NFL. However, this is a blood feud, and after being blown out in Week 2, the Niners will get their revenge (before losing at Seattle in the playoffs).
Niners

Tom: Well, I bet against the Seahawks, AT HOME, last week and looked the fool for it. Never will I picked against them again. Wait, they’re not home this week? Dammit. Fine.

Tom: The Panthers are rolling, but their offense seems to be doing just enough to get by. And with the domination of the Saints offense by Seattle last week, don’t you think they’re just raring to get that train/float started up early and often at home this week?

Jesse: New Orleans was destroyed by the Seahawks last week, and while Riverboat Ron’s team has been on a roll, I think the Saints will re-assert their dominance in the NFC South in a close, hard-fought game.
Saints

Jesse: The Bears handed the game to the Vikings last week, and while I think their offense will put up yardage against the Cowboys D, I don’t think they’ll be able to stop Dallas’ offense. This is the rare occasion where Dallas will win a game they’re supposed to win.
Cowboys

Tom: Blech. This is a “big” game for Monday night in team’s histories only. Both teams are mathematically alive in their respective divisions mostly because of ineptitude by the other teams in said divisions. McCown still continues to put up big numbers, and Dallas’ pass defense is D-testible. But can Chicago’s defense do enough to stop “America’s Team”? This one might be a shoot-out, which would be much preferable over a 13-9 type game. I doubted you last week Dallas, so I’ll give you the nod this time. Which means you’ll lose. Sorry.