Jesse: So maybe Greg Schiano wasn’t off base for treating Josh Freeman like a leper. After his embarrassing debut, Freeman was a healthy scratch for last week’s game against Dallas, because according to the Vikings coaches, Ponder “gave them the best chance to win.” Of course, this begs the question: WHY IN THE HELL DID YOU GIVE MILLIONS OF DOLLARS TO JOSH FREEMAN? As for Washington’s quarterback, despite Sally Jenkins’ assertion to the contrary, it appears that RG3 is once again leading Washington towards a come-from-behind playoff berth, with this upcoming win getting them closer to and NFC wild card slot.

Tom: After Washington pulled off the OT win against the Chargers last week (new coach, same ol’ Chargers), the team that shall not be named must continue to win in their pursuit of the Cowboys for the NFC East crown. This is a must win for Minnesota because, well, they’ve only won one game so far this year (at that was vs. the 2-win Steelers). Ponder looked good last week, but guess what? That was against the 31st ranked passing defense. Deangelo (aren’t there are like 4 guys in the NFL named Deangelo?) Hall is playing better and the defense is getting better each week, especially with takeaways, of which Ponder is more than happy to provide.

Jesse: Seattle’s sluggish play against Tampa Bay last week at home was alarming. I have a feeling they’ll be a little bit better prepared this week. By the way, don’t you feel for Tony Gonzalez? The guy was set to retire and embark on the rest of his life, only to be lured back for one more chance at a Super Bowl ring. Now he’s stuck on the Falcons, waiting for the tire fire to eventually burn out.

Jesse: Apparently, Jim Schwartz rips off his headset and throws it to the ground in between spits at the end of each game. That annoys the hell out of me. For that arbitrary reason, I’m picking Chicago.

Tom: After Green Bay’s stumble and subsequent losing of Aaron Rodgers for the next 3 weeks (or the rest of the season), it may be up to one of these two teams to contend for the NFC North title. I can see this division possibly being won by a .500 team now. Detroit seems to win those games you don’t expect them to, and this seems like one of those games.

Jesse: Chip Kelly’s offense continues to do well as long as there’s a competent QB under center. Combine this with Rodgers’ injury, and the Eagles win handily. If the Packers start Mike “I also loved Brandon Weeden” Holmgren’s favorite project, Seneca Wallace, they may lose by 4,000 points. It’s science.

Tom: Nick Foles just threw more TDs in one game than Seneca Wallace has in the past 3 years.

Jesse: Tennessee is favored by 14 points, which seems ludicrous, as they’re only 4-4 and as mediocre as their record indicates. If I could pick against the spread, I’d pick the Jags. Unfortunately, I just can’t pick Jacksonville to win. Ever.

Jesse: Between Monday and this past Sunday, I got to endure 2 straight Rams games. God, the Rams suck. Kellen Clemens is nobody’s answer for anything. Professional Footballing Tip: If your QB is known as “one of Brian Schottenheimer’s guys”, your team will not do well.

Tom: The Rams do just enough to stay in a game and then lay an egg at the end. If you’re a Rams fan and haven’t died of a heart attack yet, you are a strong individual.

Tom: “He Hate Me” game of the week. Blergh. Who friggin’ knows.

Jesse: Terrelle Pryor was injured last week, but it looks like he’ll be playing this week. If they were playing at home, I’d pick the Raiders to win. They aren’t.

Jesse: At this point, both teams are playing out the string. The Steelers appear to be broken, with over-the-hill players and the most unlikable Offensive Coordinator not named Mike Martz at the helm. With E.J. Manuel returning, the Bills actually have a dash of hope. Therefore, I’m picking Buffalo.

Tom: So, here’s my strategy—I will pick the opposite on Steelers games from what Jesse picks. So odds are, get ready for a load of Steelers picks from me the rest of the season.

Jesse: For starters, I wasn’t able to edit last week’s column, so apologies to commenter “gregroll.” You were right, Greg…Andy Dalton had 5 TDs the week before, not 4. With Geno Atkins’ season-ending injury, that game may have been the peak of the Bengals’ season, so by all means, savor it. I think the Ravens win a squeaker, bringing the Ravens and Browns (GO BROWNS) closer to the AFC North lead.

Tom: Once again, the Bengals had a prime chance to put more distance between themselves and any contenders to the AFC North. And once again, they failed. One step forward, two steps back. Even with Atkins out, I still think they have enough to beat the Ravens and Joe Succo.

Tom: At San Fran? Yeah, I think the Rivera stare-a returns this week.

Jesse: Carolina became a good team so gradually over the last month or so that I barely noticed. Unfortunately, all of that work will be for naught when they go to San Fran. Ron Rivera vs. Jim Harbaugh? HAHAHAHAHAHAHAHAHAH come on. 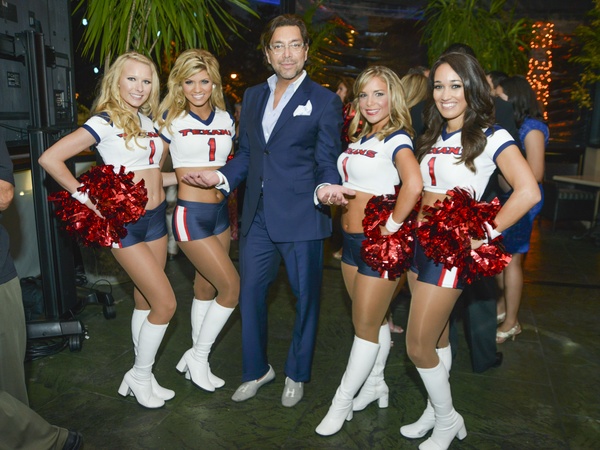 Tom: Hey Chargers, remember when you could have won the game last week, but you failed to get 1 yard in 3 tries? Well, I don’t think you’ll have to worry about it being that close this week.

Jesse: This game could prove to be a difference-maker in the AFC West once the season is over. The Chargers will almost certainly go out to an early lead against Denver, but since they’re San Diego, I’m sure they’ll gag it away like they always do. I have a feeling Denver will be distracted by losing John Fox, and may be looking ahead to next week’s battle against Kansas City, but I still can’t pick against them here.

Jesse: I smell a New Orleans blowout. I’m hoping for one of those 38-35 games, but the Saints are at home, and I think Rob Ryan will be eager to shove it to the Cowboys for firing him. I think the Saints will be up by 21 before Monte Kiffin installs his hearing aid correctly.

Tom: Kiffin may be done with football. Is it the personnel, or do his schemes not work anymore? Drew Brees is pissed off and at home. Rob can’t wait to welcome his old team to a Cajun-style beatin’.

Tom: The Bucs put up a fight with the Seahawks last week, but ultimately remembered they were who we thought they were. The Greg Schiano clock continues to tick tick tick. Richie Incognito is a dick dick dick.