Spymunk Lets The Right One In

Oskar and Eli, the world’s not good enough for either of you.

Now,
it’s entirely possible that you might not know who Oskar and Eli are,
and if that’s the case then I feel bad for you. Oskar and Eli are the
main characters in a movie called LET THE RIGHT ONE IN, based on an
amazing and wrenching book you owe it to yourself to read whether you
see the movie or not. But this isn’t an essay about the book – this is
a blog in which I try to get out my emotions and talk about the film
and how much it means to me.

LET THE RIGHT ONE IN is, above all
else, to me, a loving story of the kind of friendship most people don’t
understand – that depthless, haunting friendship that knows no limits
and knows no compromise, that transcends love to the point where it
becomes painful for those involved.

Oskar and Eli are in my
opinion one of the greatest onscreen pairings in the history of cinema.
That’s not just hyperbole meant to spice up a movie review. I really
mean it, in a sincere and heartfelt way. This movie touched me in a
truly profound fashion, and I cried in a state of amazingly open and
aching empathy as often as I gasped from the intensity of their tragic
and fateful meeting. 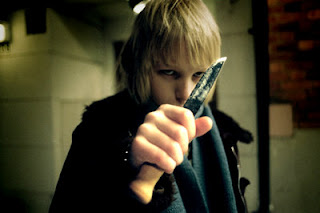 Oskar
is a weak, timid boy of the sort being increasingly taken advantage of
and made miserable because who and what they are is being beaten out of
them by a system that honestly couldn’t care less what happens to “the
youth.” He is hurt, damanged, lonely and entirely disenfranchised by
our politically-correct school system, the kind of kid who has creative
urges he’s given no outlet to express by his educators and thoughts
he’s given no manageable way to explore because his very existence is
rejected outright by society. He is bullied and mistreated on an almost
daily basis and as a result, at the start of the story, his mind turns
more and more toward the insular, losing himself in bloody fantasies in
which he takes revenge on his tormentors. His tale is tragic, in and of
itself, because there are far too many kids like him in the real world
who aren’t allowed to become the people they’re meant to become, who
are told so often how little they’re worth that they believe it and see
no option out but self-inflicted immolation or a violent flame out
meant to express to the world their agony but resulting only in
destruction and misunderstanding by others.

That Oskar is on the
path toward becoming a killer but simply lacks the willpower to be a
monster, as strange as that might seem, is obvious. Perhaps oddly, the
only thing holding him back from becoming a terrible threat to those
around him is his lack of personal conviction and strength. The lack of
confidence that makes him a perfect target for bullies is also the
force that holds him back from undertaking the horrible crimes he
envisions in his mind’s eye.

I find this circular
self-fulfilling flaw to be a fascinating characterization, and it
really made me feel for and identify with Oskar in that his weakness is
of his own making and yet is born of a lack of understandign from all
of those around him who refuse to give him a chance to achieve anything
more than a momentary reaction brought on by their cruelty and
violence, none of which he deserves. Eli,
meanwhile, is a fiercely strong but dark spirit. She, too, has been
beaten down by society, but in an entirely different way that has
forced her out of the view of the public, who clearly would not know
what to do with her on a regular day, let alone given the unusual and
bizarre circumstances of her existence. She is an independent person
who through no fault of her own and bitter circumstance is required to
depend on others in ways that do not detract from her personal strength
but nevertheless chafe at her because it’s clearly not how she wants to
deal with the world. She is a acutely aware of herself and who she is,
and what she is – and, when she meets Oskar, is also acutely aware of
who and what he is.

She is an intriguing character to me
because for all her raw power, and the fire inside of her, she is
rendered inert by the world around her, which seeks to turn people in
ineffectual Oskars and their tormentors. She has rejected that, stepped
outside of the realm of what is considered normal human behavior and
suffered a brutal isolation from it that is necessitated by her
survival. Like Oskar, the human would-be destroyer, she is a force of
reckoning in the world, but she is actually capable off doing it –
because she’s not even truly alive. She’s undead – a vampire, and this
is one of the few times when a vampire story engaged me as strongly as
this one did.

You see, I don’t like vampires too much, despite
being a massive horror junkie. The overt male-dominant mentality of men
in frilly shirts dipping back hapless Victorian ladies to nip at their
jugulars does nothing for me – I can’t identify with nor engage in the
dynamic. I don’t enjoy dominant-male power fantasies or rape culture,
and I see vampires as representative of that. It’s not that I’m so
deconstructive of the genre that I can only see the metaphors. Far from
it! I love deep metaphors, but the thing is that there are metaphors
about things I enjoy reading about and things I don’t. Vampires with
the baggage (ahem!) of male domination so prevalent in the texts just
don’t appeal to me as a whole. To put it bluntly, I don’t get a kick
out of watching swarthy, rugged Carpathians bite women “against” their
will when it’s really not. That’s just not my trick.

One of the
few vampire movies I enjoy, however, is THE LOST BOYS, and part of the
reason I think the movie is so successful for me is because of just how
impossibly homoerotic it is, and how the male-dominant nonsense of most
vampire mythology is replaced with guys being on the receiving end of
the designs of other guys – it’s all about people who are “different”
and “outsiders” seducing eachother and forcing the question “Who am I
deep down inside?” That kind of metaphot is fascinating to me, and the
interaction of the characters takes on a whole dimension that becomes
less about domination from the outside than defeating your own demons –
or, in the case of the film’s finale, embracing them and at the same
time keeping your own identity while becoming stronger than you were
when the story started.

LET THE RIGHT ONE IN, likewise, is an
amazing journey for me in this way, and so interesting because the
vampire is a strong and ancient-seeming female presence and Oskar is
hapless fury who must be shaped and guided as opposed to getting his
throat torn up by Eli, at least in terms of the main narrative’s
approach to the characters. The two of them intertwine together,
becoming one – and not strictly on Eli’s terms. Eli shapes who Oskar is
by letting him live out his mind’s eye through her, and in turn the
brightness of Oskar’s vicid life-force and creative passions
reinvigorate Eli, making them not so much co-dependent but symbiotic in
the best possible way. The deep friendship between them is stronger
than most movie so-called “romances,” and I found myself crying every
time they made meaningful eye contact because it was so pure and real
and carried with it none of the preconceived expectations of most movie
couples.

Consider this – in most romantic movies, a simple
misunderstanding like an overheard phone call can be the stuff of two
hours of idiotic mewling by both genders. In LET THE RIGHT ONE IN, life
and death are literally on the line and the two characters can
communicate with eachother by a silent look so deeply that it conveys
to both them and the audience just exactly what the two are feeling,
and this is due on NO small part to the extraordinarily strong
performances by the pair of non-professional actors who outshine any of
the smarmy kid actors America offers up in its weak takes on childhood
experiences.

Oskar’s insecurities are real and people in the
audience have felt them. Eli’s pain is real and people have felt it.
These are two real characters feeling real emotions and going to real
places – and the vampire metaphor is used as a tool to enforce the real
elements about the both of them without turning it into ridiculous
melodrama.

This movie is probably the best of the year, and I urge you to see it.