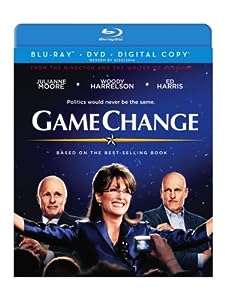 The Pitch
“A movie about Sarah Palin. Wait, why are you running away? No, it was made by HBO! Come back, come back.”–

The Nutshell
John McCain (Ed Harris) is in a bind. Though he has the experience to run the United States, it doesn’t look like he’ll be able to pull through the 2008 election. Enter Steve Schmidt (Woody Harrelson) and other campaign advisors, who suggest something drastic. They need someone with the charisma of Obama to change their fortunes. The campaign quickly picks a no name governor from Alaska named Sarah Palin (Julianne Moore) to change the game. While the plan works at first, the McCain camp quickly goes into damage control as Palin’s true character begins to show and she descends into madness.

The Lowdown
Alright, well, maybe Sarah Palin didn’t exactly descend into complete madness as suggested in the nutshell above. But it’s sexy to write it and, if Game Change is to be believed, she wasn’t that far off. I mean, just look at that. She could snap at any moment, guys.

Game Change is based off of a book by the same name, but instead relegates its focus to the Republican side. While I haven’t read the book, apparently there were only three chapters over it. These three chapters were enough to create a riveting, surprisingly sympathetic look behind the scenes at the McCain/Palin camp circa election time.

The film starts off fairly unengaging. It kind of makes sense with what director Jay Roach and writer Danny Strong are trying to achieve. They’re making the argument that McCain and his camp are dull, especially compared to the “celebrity” that is Barack Obama. Instead of making popular, good looking decisions, McCain and company are making good, unsexy decisions. They need a good decision that is also sexy. Enter Sarah Palin, whose presence in the campaign (and in the film) is a game changer.

The massive success of Game Change lies in understanding why Palin was chosen. In another filmmaker’s hands, the McCain/Palin camp might have been portrayed as bumbling buffoons. Don’t get me wrong, they are portrayed as buffoons at parts, but the best parts are seeing how smart our main characters are. It’s very conflicting when you start rooting for the Republican party. Roach and Strong manage to make a very strong case for them and for Sarah Palin. While I can’t talk about the factual basis of the film, if the Republican side embraced Game Change’s seemingly honest narrative, I might have considered voting McCain/Palin. I know, Ed Harris. We were all there, too.

Julianne Moore is this film. Her portrayal of Sarah Palin is transformative, slipping into the almost-VP’s shoes flawlessly. The performance is uncanny, yet not just an imitation. It would have been acceptable if she played into a broad parody, especially since no one can take Palin seriously anymore (not sane people, anyways). Figures like Palin are idols, not people, and it’s far easier for to digest the broadest elements of a larger than life character.

Instead, Moore’s Palin is wonderfully multi-faceted. Like all the best performances about people that you hate, you get to get inside of her brain. However, Game Change also makes the smart decision of keeping Palin at a distance. From the first second that we even hear about Palin, we don’t know anything and, by the end, she’s still incredibly enigmatic. Palin is severely out of her depth and we see this in so many ways, but you never fully get the reasons why. She’s sympathetic, but her motivations are painted in broad, slightly ambiguous strokes. This makes her even more mysterious, and Moore’s cold but vulnerable performance makes sure that you still have questions at the end. Where did it go wrong? Why didn’t she just ask for help? Why’s she so crazy? Did she actually go crazy? Did her husband actually eat their baby?

A fascinating scene from the film calls Palin’s sanity into question. Palin is on the phone with Schmidt, doing a walk and talk down a hallway because this makes dialogue dynamic and important. She eventually settles into a stairway and, getting overwhelmed, throws the phone into the winding structure. Now, this is absolutely fascinating because a.) this film is based in fact, so I’m led to believe it happened, and b.) it’s crazy go nuts bonkers that this woman was seriously a heartbeat away from the presidency. Of course, drama and whatnot, so it could be fake. But it increases the danger factor.

All of the great performances manage to slip in a sliver of truth and Moore delivers in spades. Palin’s just a mom that has a tremendous opportunity for enormous power and Moore brings her Alaskan-mother energy to the screen. That doesn’t give an excuse for real life Palin to spout lies and deceit all over the place, but Moore’s portrayal lets you see where the thought processes went wrong. You understand why she’s making awful decisions and why she’s so scared. You also see her descent into madness, something truly surprising and unsettling for someone so sympathetic. It’s like giving an 8 year old keys for a room made with pizza walls. It’s a bad idea for an 8 year old to go into a pizza room, but the 8 year old will never, ever leave that room. Because it’s a pizza room. Crude metaphor aside, you really feel that aspect of entering the pizza room in Moore’s performance.

Woody Harrelson and Ed Harris also shine as Steve Schmidt and John McCain respectively. Now, I don’t know how Steve Schmidt talks, but I bet he doesn’t talk like Woody Harrelson. If he does, then it’s the world’s most serendipitous happenstance for Mr. Harrelson. If he doesn’t, then Woody still gives a really solid performance. Exuding all the confidence of a great campaign manager, when things get off the rails, Harrelson makes sure you feel it all going to crap. Above all, Schmidt is here to win, and Schmidt’s fight against his own moral judgment regarding Palin provides a nice runner through Game Change. Like Woody being Woody, Ed Harris plays himself, except this time he’s named “John McCain”. Personally, I’m a fan of it, since Harris gets the spirit right. His McCain is a great symbol, a smart guy, but not the smartest in the room when you get everyone around the table. He’s a bit out of touch, but that’s because he’s got a chance at the presidency. You try being composed whenever you could get the keys to the pizza room, I mean, White House. Harris has the challenge of playing a smart guy that’s sometimes really clueless, which could be funny AND sad. Of course, since he’s Ed Harris, he pulls it off masterfully, making you see McCain as misguided, but decent.

The film is littered with fantastic bit performances from people you definitely love (Ron Livingston, I presume?) and the script is absolute gangbusters. Like I said, I haven’t read the source material, but the decline into insanity the McCain/Palin camp is delicious to watch. It sucks that it’s real life and that people actually believe the lies spouted by Palin. Game Change, while dealing very much with larger than life characters, is so masterfully grounded in reality that it makes the typically villainous/dangerous Palin into someone human. That is the touch of genius here, creating a responsible dialogue about American politics. Again, Sarah Palin is still a pretty awful person but, with Game Change, at least you have a palpable understanding of what makes her so awful.

The Package
The package here is pretty slim. We have two fluffy pieces: “Creating a Candidate” and “Game Change: The Phenomenon.” “Creating a Candidate” talks to various political pundits about the pressures of running for office, whereas “Game Change” is a short piece about the book it’s based on. Not too terribly much, but it offers a little bit of insight into a fascinating film. A no pants maverick for the ages.