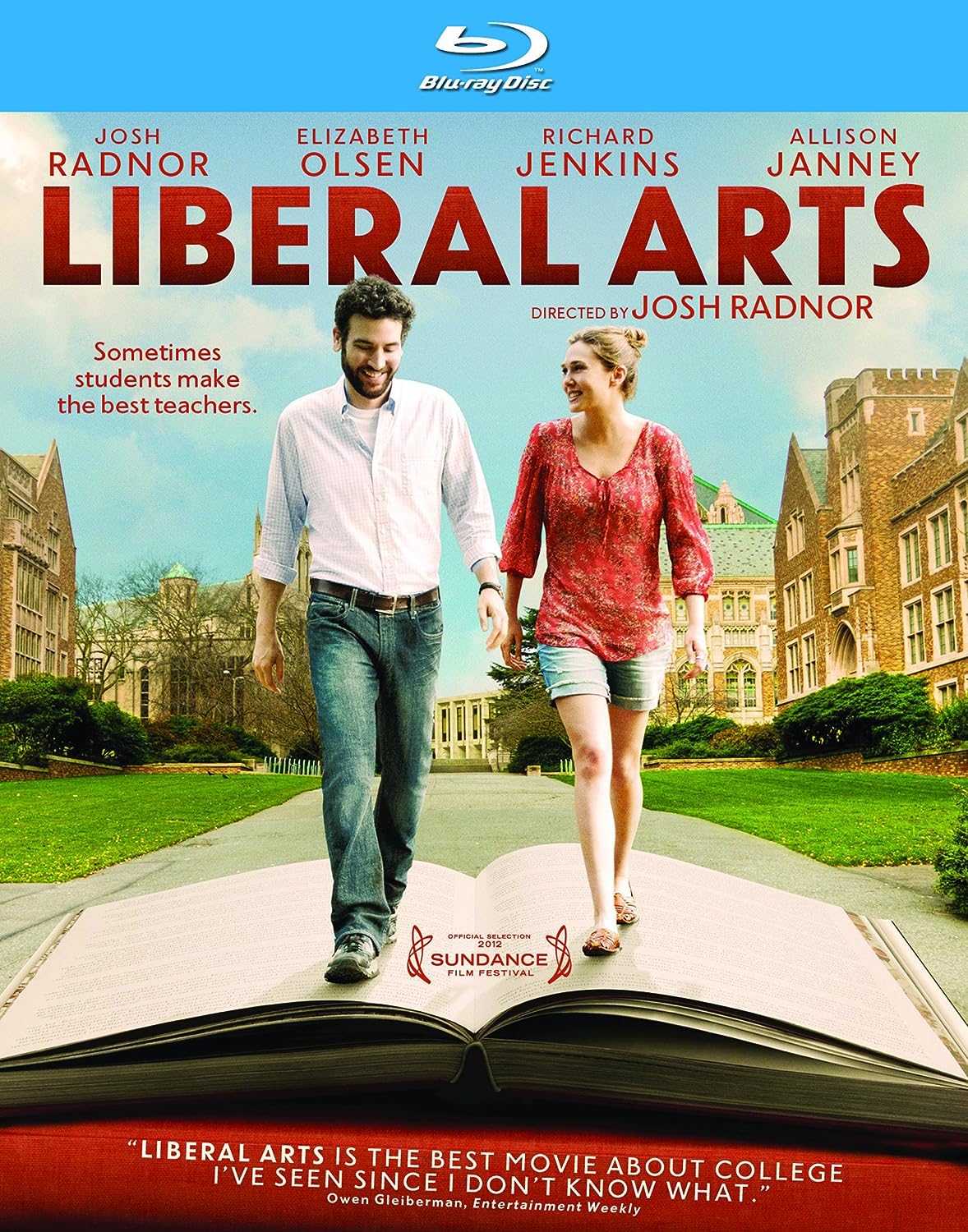 The Pitch
“What if a white thirty something man was obsessed with academia? And also thought he was funny?”–

The Nutshell
Jesse (Radnor) is a 35 year old college advisor who gets invited to celebrate his old professor’s retirement at Jesse’s alma mater. While there, he meets a 19 year old old soul named Zibby. Together, the two try and define the nature of what love is while Jesse tries to determine just who exactly he wants to be.

The Lowdown
In my time here at CHUD, I’ve found that I’ve been writing a lot about white people with white problems. Men, women, young, old…most of the reviews I’ve written have been about caucasians trying to deal with emotional issues. There’s been some romanticizing, lack of communication, lots of talk about following your dreams…one time, there was a dance battle. That last one isn’t so much a white person problem as it is just awesome.

Of all the white people with problems movies I’ve watched, this one might possibly be the whitest. There is most definitely a germ of a good movie here, but the execution is so insubstantial and so saccharine sweet that it makes me want to throw things. Which was a problem because the closest thing was the Blu-Ray case. So now I have shattered Blu-Ray case all over my floor and no case for my Liberal Arts Blu-Ray. See? Now I’m having white people problems. The effects of my prose.

So let’s just dive in with our protagonist. Jesse is slumming it as a collegiate advisor at a second rate college in the greatest city in the world New York City. I only add that tag because Radnor shoots the city in ways that lets us know that he loves it the most. After breaking up with yet another girlfriend, our aging hero goes back to reminisce about times long past with his old professor, played by Richard Jenkins.

The chemistry between Jenkins and Radnor is…well, Jenkins is a good actor. It’s not awful. Not by a long shot. It’s just that, with Jenkins, you should feel something that’s a lot more powerful. When Radnor begins to make bad decisions in the movie, Jenkins calls him out on it. The problem is that the interactions between both characters never feel any deeper than the surface level conversations that they have. All of the dialogue is very precious, yet writer/director Radnor wants to have some drama behind it. Even Zibby thought it was boring.

In fact, most of the dialogue in this movie feels like a second draft at best. Imagine a movie where every half-written joke made you the most charming person in the room. I know that people think Jesse is charming because our manic pixie dream girl, Zibby (Elizabeth Olson) falls head over heels for this 35 year old. This suggestion of charm isn’t the only time someone tells the audience what Jesse is emotionally. Almost 90% of the main traits of this character are filled in by those around him. We’re told that he and Richard Jenkins were friends, but they rarely have meaningful conversations. There is absolutely nothing engaging about Jesse besides how passionate he is about literature. I only know that’s engaging because I’m told it’s engaging. In other words, there’s absolutely nothing engaging about our protagonist, nothing of real substance.

I can feel Josh Radnor trying his best to be charming as Jesse, but his version of charming just comes off as bland and inoffensive. Add on top of this that his main struggle is…he’s unhappy with his job? He might be unhappy with his relationships? We definitely know he’s nostalgic for his old college. He seems happiest here, especially since, within the first ten minutes, we see him uncharacteristically running and jumping on the campus. So, if he’s in a place that makes him happy, surrounding himself with people he loves, and a place where he seems to belong, this obviously means that…no, Jesse goes back to his unhappy job because he’s too old. Despite the fact that Richard Jenkins seemed to live a fulfilled life teaching at the college. College rules! Just look at how happy Zac Efron is!

You can see why I’m wrestling with the logic of the movie. You can’t have your main character learn a completely different lesson than the one that was presented. Especially since everything within the movie was incredibly pleasant. Even the conflicts were pleasant, dang it.

Speaking of pleasant conflict, let’s talk about the character in the crux of Jesse’s dilemma: Zibby. Every single other element in this film feels perfunctory in order for Radnor to get to all of the conversations he writes for Jesse and Zibby. Zibby is a 19 year old free spirited old soul that happens to be fixing Jesse’s concepts of love. It’s a tragic case of manic pixie dream girl, made doubly worse because Jesse is almost twice her age, yet has her life totally figured out. Seriously, this girl exudes total confidence and is absolutely fantastic for Jesse emotionally. She’s WAAAY too good for him in every single way.

The whole time, I questioned just what exactly she saw in Jesse. Maybe that was kind of the point, but the character felt smart enough to completely see through that. I chock this all up to Elizabeth Olsen, who I totally bought every single second she was on the screen. We might question just what exactly she sees in Jesse, but we know every single reason why Jesse would be attracted to her (besides the 19 year old part). We’re also not just told it; we feel it. In a movie so eager to tell instead of show, Olsen acts the crap out of her part. Emphasis on crap. See what I did? Because we can see her butt is why I said this.

It also makes me hate Jesse whenever he makes the boneheaded decision that it won’t work out because of the age difference. It seems an incredibly arbitrary decision in the context of this film, one where everything is just pleasant. Instead of going for the pleasant ending, Radnor goes for the “smart” one. If this were a smart movie where you could actually feel the internal struggle of our developmentally stunted academic, it would be a satisfying ending. You have to tell yourself that Jesse is wrestling with wanting to be a child and an adult at the same time. You never once feel the struggle, nor the real downside of staying a child. If everyone was happy because they stayed at college, then why leave?

So I’m not a fan of this movie. It’s bland, unclear, and just okay. Here’s hoping Radnor casts someone besides himself in his next film. Also, here’s hoping Radnor goes through his next script another twenty times before he directs it. There are so many gems of good ideas here, but they’re so half-done, it’s unfortunate. Plus, it’s another white guy lamenting his youth. I have no other words for this premise besides blergh. But there are fan dancers. So Liberal Arts has that going for it.

The Package
The package comes with Radnor and his producer giving a very self-congratulatory commentary over the film, along with a trailer and a featurette. The most substantial piece here are the deleted scenes, which show an entire subplot deleted from the film. Sadly, while the acting here is the most entertaining of the entire film, it serves absolutely no purpose to Jesse’s struggle.