BOOK REVIEW: THIS IS 40 – THE SHOOTING SCRIPT 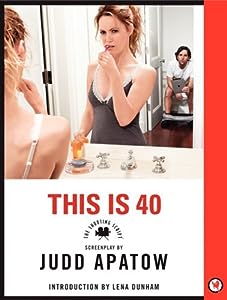 MSRP $14.99
PUBLISHER Newmarket For It Books

This is 40 is a weird, weird movie. Even though this is a book review, this is the screenplay of the film. Also, the screenplay is pretty much the movie transcribed. There’s absolutely no way that a reference to set dressing was pre-written, especially in an Apatow film. So, if you’re just looking for a great version of the movie to read, then this is the book for you. With some brief words by Lena Dunham, Graham Parker, and words from Apatow describing his process, it’s a great collection to have if you are a massive fan of the movie.

The biggest problem, though, is that I can’t think of anyone that would be a massive fan of this movie. Honestly, there’s not much else to review book-wise except for the actual content within, so allow me to treat this book review as a script review. Which makes sense considering the book is a script.

Like I said at the beginning, it’s a weird piece. This is 40 is far more episodic than a straight narrative. Apatow’s personal writing efforts have often yielded something that’s atypical, but this one is the most disjointed. It’s not unexpected; look at Funny People. That was two movies smushed together to make something that was long, bloated, and completely different. Whether it was an actual disaster is left up to opinion, but Apatow has definitely been pushing to do more unconventional work with his own writing/directing in terms of structure and themes. Yes, almost all of his work involves man children, but the way he’s telling that exact same story keeps evolving. Here, that evolution has taken him into a place that…well, it isn’t that fulfilling.

This is 40 spins off the story of Pete and Debbie from Knocked Up and chronicles the week of their 40th birthday (their birthday is the same week). I wish I could give you a more involved synopsis of the narrative but it’s a slice of life movie. There isn’t a great theme at play here, instead just dropping us into the life of Pete, Debbie, and their kids. No greater set up besides some line that their 40th birthdays are both this week and that they’re having problems and disagreements.

That’s okay, though. If you think that translates into a movie where nothing happens, you would be dead wrong. There are a thousand different plot threads in this movie, including (SPOILERS)

On top of this, there are a litany of subplots with side characters that don’t amount to anything except being funny. While all of it is incredibly funny when you have the right actors, on the page, it just doesn’t translate into comedy at all and becomes really frustrating.

One of the main tenets of storytelling is to be interesting by any means necessary. Whether you rely on cheap gimmicks, like being a guy that jumps out of a bush or blowing up Chicago because you’re Michael Bay, it just makes the audience pay attention. Humor is a super easy way to grab attention.

However, in narrative filmmaking, you can’t sacrifice telling a story in order to be interesting. There’s just no time for it.

This is Apatow’s downfall not just in This is 40, but in all of his films. It just so happens that This is 40 exercises all of his worst tendencies. It’s a bloated, unfocused movie that doesn’t have a greater thesis besides marriage being difficult. But, once you accept the fact that the meaning is that simple, it helps the movie tremendously.

Yeah, I know I said the movie’s a big, fat mess. Apatow isn’t trying to make a conventional film here. It is a series of episodes because that’s what life is. I firmly believe that, if This is 40 was a television series, it would be far better received.

Having said that, the scene is really entertaining and informative from a characters standpoint. It feeds into a better understanding of the characters and shows them in different circumstances. It recontextualizes the characters by saying that, if they weren’t super stressed out all the time, they are nice people that actually like each other. Even though the scene itself doesn’t feed into the ultimate end, it still feeds into an understanding of these characters.

That’s one of the biggest errors of this script/movie. Each scene is really interesting and funny, has character in it, but there’s not a greater purpose to it all. There’s a germ of a good idea in each scene, but nothing of any substance develops from it. When the movie is close to ending, things become magically resolved. If Apatow was allowed an unlimited time to pontificate on these issues, the movie would never end. It only ends because it has to. Apatow’s trying to make something greater than the sum of its parts, but he’s stuck in the Western film format.

The other problem with this script is that Pete and Debbie…well, they’re just hard to sympathize with. Constantly, they are making emotionally driven decisions and having problems dealing with money. Due to the performances in the actual movie, I sympathize with them. Removing the actors, tell me if you can sympathize with a family that has money problems whenever they have a two story house with a guest house out back. The solutions are simple, but the characters are so selfish and emotionally involved that they are incapable of making basic solutions.

I can take a selfish and emotional character. That’s every single character on Game of Thrones. However, there is a logic to their selfishness, be it aspirations for more power, being insecure about themselves, or sex. In This is 40, their emotionality doesn’t possess a real logic behind it. Are these characters so insecure that they can’t make the decision to move to a smaller house because it’s cheaper? What is the logic behind healing the daughter’s earache with Eastern medicine?

The actual film is a great watch, carried by great performances and really funny people. The writing itself is a mess, a conglomeration of scenes that end with the understanding that we’re all flawed. Not a particularly strong message, as the script hits you over the head with it within the first two pages. While all of the elements taken by themselves are entertaining, they don’t end up as anything of substance.