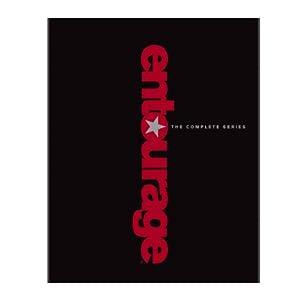 The Pitch
“What if there was a show where rich people got exactly what they wanted?”

The Nutshell
Vincent Chase (Grenier) is the world’s biggest movie star, but not even he can do it alone. With best friend “E” (Connolly) managing him, Turtle (Ferrara) and big brother Johnny Drama (Dillon), and super agent/sociopath Ari Gold (Piven), the entourage takes the town by storm through ups and downs.

The Lowdown
When I sat down to write this article, I got about a page in and realized I don’t know how to properly sum up Entourage. Not that it’s terribly complex. In fact, it’s mostly straight forward, save for Kevin Connolly’s apparently douche-y performance that was unable to get through his nice guy facade. It’s also overwhelming. I watched this show in the span of a month and a half. To people of our ilk (i.e. nerds), this is a whole other life time, especially considering each episode runs about 30 minutes.

To try and justify my actions, let me say this: Entourage is a workout. It’s a test of endurance and I’m a glutton for punishment. I’m also just a glutton, but that’s neither here nor there. And the first bunch of episodes are the epitome of insipid. I cannot tell you how completely irrelevant this show is in a post-Occupy world. How can I empathize with any character who possesses multiple gardeners and a Hummer? If you are attracted to pretty people succeeding by sheer circumstance, this is a show that you will love from the first frames. I know, entourage. Even I was surprised that I made it through.

It’s not a bad show by any means. Not by a long shot. I’d rather take an episode of Entourage over any single crime procedural. I’ve had enough semen splayed all over corpses. It just doesn’t have the same excitement for me as it does for the rest of America, but that might have to do with me jerking off on corpses on my Thursday nights. No, my friends, understand me wholly when I say Entourage is quite entertaining. There are far worse ways to waste 30 minutes, especially if you’re a misogynist career oriented male that loves to ogle rich people.

I was not expecting to like Entourage. I’ve known of the show for awhile, but the only real times I paid attention to it was when it was cancelled. Surprisingly, I was won over., and it wasn’t an issue of Stockholm Syndrome, either. The show is good, existing in a class of not quite comedy but not quite drama, all within a half hour. Shows just don’t do that ever, which is why it was kind of neat to see just how low the lows get. Additionally, it’s not so self important to make it into an hour. Maybe that’s why the show, despite its often rich people problems plots, never wears out its welcome. It’s incredibly flawed, but genuinely pleasant.

Our entourage is engaging enough. The main character is Eric, cleverly abbreviated to “E” because it’s a syllable shorter. Eric is our straight man, the most blue collar member of the group, despite driving expensive cars and sleeping with insanely attractive women. There’s also Vincent Chase (a Hollywood name if I ever heard one), a flighty leading man who is the least responsible, but most charismatic, person ever. Kevin Connolly and Adrian Grenier do fine jobs with their respective characters, but it’s nothing terribly interesting. The problem with doing just a fine job means that it never particularly elevates above that. When E is labelled a jerk at points in the show, it’s very hard to believe it because a.) Kevin Connolly looks like someone you just want to cuddle, and b.) he’s so nice and flat. His deliveries definitely favor on monotone, which works most of the time. It’s a fair companion to Grenier’s Vince, who is just about as nuanced as E. Vince is most entertaining when he’s being a celebrity or being a dunce, but feels surprisingly ancillary in later seasons. The shining moment for the character is in season 5, when he has a massive dry spell after a flop. There’s a real tangibility to his desperation for work and to be relevant. Vince is a celebrity and, without his fame, there’s not a reason for him to exist. That’s why he’s able to have sex with a woman who’s getting married: because he’s on her “celebrities I’d sleep with” list. I have some criticisms, too, but that’s coming later.

Rounding out the entourage are Turtle and Johnny Drama. Turtle is a fun character and his hair is nice. That’s about it. Johnny Drama, however, is hysterical and the high point of the group. Vince’s big brother is a big wimp of a dog, challenging everything that comes his way, but quick to cuddle. It helps that Kevin Dillon gives Drama the saddest, most clueless eyes in every scene, something I pray is intentional. He’s a cartoon of a character, which is why it makes sense when Drama gets his own cartoon by series’s end. Turtle’s characteristic. The show is rife with rich characters.

The real standout of the show, though, is Jeremy Piven as Vince’s superagent Ari Gold. Ari is a juggernaut of a character and a borderline sociopath in so many ways. Yet, Piven is able to make this detestable low life of a human being a sympathetic character. While Ari is capable of real feelings and emotion, his passion for his job as an agent is all consuming. It’s kind of lame to say that it’s an absolute powerhouse of a performance, but Entourage and any goodwill it generates is a result of Piven.

While we’re on the topic, let’s talk about the show a little. You know how I said the show was a little bit of an endurance test? Here’s why. The first season was incredibly hard to get through because the characters are douchebags. They are completely undeserving of their fortune and the fortunes that go along with that fortune. Within the first five minutes of the pilot, Vince has conversations with two gardeners, yet we’re expected to feel sorry for him when Mark Wahlberg got a part that Vince might have wanted. While most of you might think that I’m rolling in fat CHUD cash, I certainly don’t have two gardeners. I know I’ve already verbalized this sentiment, but when the stakes of the show are so unrelatable, it kills the drama.

In fact, the characters work best when they’re failing. Going back to Season 5, Vince becomes an underdog and, on his climb back up, he has to do anything that comes across his way. That includes doing things like bat mitzvahs and bit parts. Vince fails a lot in this season, causing actual dramatic tension. For a moment, it looks like Entourage might be a rise and fall story of an irresponsible asshole and his friends not cherishing the almost criminal lifestyle they indulge themselves with. And, for a moment, it looks like the show is going to be about something!

But, of course, Martin Scorsese calls Vince personally at the end of the season and offers him the lead in a film. Aquaman’s James Cameron is not amused.

Therein lies every single fault of the show and how incredibly easy everything gets fixed. No matter how dark it might get, there’s always that feeling that everything will work out because our entourage is filled with a bunch of nice guys. Not every single episode ends like this, but, when Johnny Drama gets to make out with Vanessa Angel despite being a complete douchehat the entire episode, it kind of lets you know that everything will be okay all the time. It makes for pleasant, passive viewing.

In fact, I found myself far more interested in the non-entourage (or the non-tourage [I know, I know, I’m great]) portions of the show. Watching four guys sit around and smoke weed while being rich isn’t terribly fascinating. What is fascinating is watching the politicking involved in getting Vincent Chase’s career going. Seeing Ari Gold yell his lungs out time after time again in order to get what his clients want is a cornerstone of the show. You add actors like Beverly D’Angelo, Malcolm McDowell, and Carla “Holy crap, I’m hot and everyone knows it” Gugino and the performance and the episodes are captivating.

Piven is electric, giving a ruthless and complex performance that he will never get away from. He loves his wife and family and will do anything for them, but if it gets in the way of his business, she gets tossed aside. What’s more is that it never feels malicious; it feels unfortunate. There’s something to be said of a sociopathic performance that engenders goodwill about it. I found myself both for and against Ari constantly, which makes it all the more rewarding to watch. Seriously, he’s one of the great characters.

It is in Ari’s celluloid politicking that the show comes alive. Without it, the show would just be full on dream fulfillment, but seeing Ari fight and lie and take a paintball gun into one of the offices make the show stand out. It ranks with some of the best political shows, showing show business without any of the glitz and glamour. It’s ruthless and evil and outstanding to watch.

Mostly, Entourage is pleasant. It’s never too mentally taxing, but it’s interesting enough to keep you compulsively watching. If you want a look behind the curtain of Hollywood, it’s a great deconstruction and a pretty entertaining show. Carrie Fisher is a washed up writer here. Also, she plays one in the show. ZING!

The Package
The Complete Series set of Entourage comes in a really swanky box that I kept flipping through over and over again because it’s pretty. I know that’s not the most professional review of the actual packaging, but I liked it a lot.

However, if you’re looking for anything new or insightful, you’re not really going to find it here. The set is all of the DVD’s previously released in a collected form. If you’ve got the rest of the sets, there’s no real need to re-purchase it unless you want a really nice box.

Also, to review the actual bonus content, it’s all largely fluffy and self-congratulatory. There’s no tremendous meat to anything, much like the show. There are some audio commentaries, some retrospectives, and a lot of EPK pieces, but no real insight on the craft of making this show.

At some point in the special features, creator Doug Ellis says that this is the most realistic show he’s ever seen (I may be paraphrasing). Having seen every single episode of the show, he’s delusional. I feel like this statement sums up the general attitude towards the show from those that worked on it and the behind the scenes aspect on the show. The series finale shocked millions when we found out Vince was in stuntman purgatory the whole time.