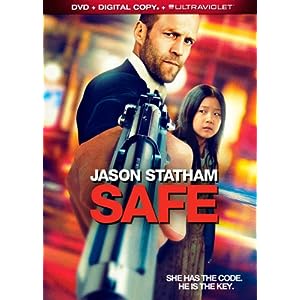 The Pitch
“Jason Statham Movie 19: Homeless with a Vengeance”

The Nutshell
Luke Wright (Jason Statham) is a former NYC detective living on the streets because of some debts he owes. Mei is an elementary school-aged prodigy who has been trafficked into NYC for business purposes with the Chinese mob. When Mei is forced to memorize a series of numbers for a safe, she becomes NYC’s most wanted, being chased by the Russians, corrupt cops, and the Chinese mob that captured her. It’s up to Luke to protect her and get down to the bottom of it all at any cost. As in Luke kills a bunch of people before the end.

The Lowdown
It might be a moot point to review a Jason Statham movie. I can name on one hand the amount of Statham movies that I have liked/been interested in seeing. But you don’t see a Jason Statham movie for the plot, much the same way you wouldn’t watch a Schwarzenegger movie to hear his clear diction. At least Schwarzenegger wore glasses sometimes, adding some kind of superficial variation to his roles. Jason Statham seems to play the same character every time he’s on celluloid. That’s not necessarily a problem, but it does give you a good idea of the quality of any new movie of his. At least he’s consistent? Crank 3 – Chev Chelios has to literally drink himself to death in order to…do…something…stunty or something.

Safe is yet another entry in the Jason Statham Wears A Suit Jacket boxset that I’m putting together for my non-existent nephew. In it, Statham is a transient that is about to kill himself until he stumbles upon nefarious plots that only he can kick his way through. He fights his way back to redemption and, about halfway through, ends up in a suit jacket.

Surprisingly, Safe is a pretty decent B-movie. For the first twenty or thirty minutes, the movie seems to be more interested in establishing character as opposed to getting to the action that Statham is so very good at. This lets Statham actually act, made all the juicier by how incredibly down and out his character is. Wright can’t do anything due to his debts to the Russian mob, so much so that when he offers his shoes to a fellow homeless man, the mob kills the man. It sets up just how villainous the bad guys are and sets up how dire Wright’s situation in.

It also makes me cheer when Wright finally cuts loose. As he’s about to throw himself on some subway tracks, he meets Mei, who is running from some Russian mobsters. For movie reasons, he needs to protect this child, so he jumps onto Mei’s subway and proceeds to beat the living daylights out of Mei’s attackers. He then makes it his absolute mission to protect her, made all the more obvious by the fact that he shoots the mobsters point blank in the subway, then tells the other passengers that he had it coming. Except for this guy. Luke just made him watch Indy 4 again.

If this film has anything going on for it, it’s the absolutely brutal and incredibly well-executed action. While I haven’t watched a tremendous amount of action films from the 1970s, I could absolutely tell that the filmmakers were paying homage more to movies like Dirty Harry as opposed to the Bourne movies or something else with shaky cam. The movement is clear and coherent, amazingly hard hitting, and often done in one take. There are several sequences which start in one area, then follows the movement as opposed to cutting on the hits. There’s one shootout which you see mostly happen in a mirror. It’s very different and quite dynamic. I was jumping out of my seat when Statham takes one of Mei’s attackers and logically hits him in the balls with a stationary subway pole. You see the choreography of the fight beautifully, yet it seems completely real and vicious.

As fantastic as the action is and as great as Statham is, the rest of the film is just decent. For starters, its a story that we’ve seen a billion times, which is jaded bodyguard-type protects a kid. It’s been done. Instead of dwelling in the film’s strengths, though, the filmmakers are convinced that they have to imbue some character in there. This fails disastrously in the part of Mei, played by Catherine Chan, the worst child actor I’ve seen maybe ever. Her deliveries are varied, but a majority of them are completely flat. I would LOVE to be invested in this relationship, but the character is so incredibly flat, I just don’t care and want to get back to the amazing action sequences. Mei’s hair is more vibrant than 100% of her performance.

Writer/director Boaz Yakin wants to make something better than a B-movie. This intent shows best because you don’t get the first cut loose action scene until roughly 30 minutes in. The problem with this is that Yakin doesn’t know how to make those first 30 minutes engaging. The first ten minutes we meet both Luke and Mei a year before the film starts. We see Mei getting kidnapped and Luke’s wife getting killed by the Russian mob. Then we shift to “present day” and are re-introduced to the characters. Then we’re introduced to about nine thousand villains, including three different factions that will eventually be chasing after this girl. Then we’re reminded about nine thousand times just how much Luke’s life sucks. This lengthy and often redundancy filled set up makes the entire film drag. Granted, it’s an hour and a half film, but it’s a B-movie premise with a B-movie cast (sorry, Jason) and A-plus action. If you want your B-movie premise to be elevated to A material, you have to be able to make your character beats interesting enough that it would be able to hold its own movie. Die Hard is always a great model and that movie got started 20 minutes in.

Yakin clearly wants to make Safe an important, different movie, but ultimately fails. Outside of a good performance from Statham and, again, some AMAZING ACTION SEQUENCES, it’s not enough to recommend a watch. The plotting is bland, the rest of the performances are just meh, and it’s ultimately a forgettable experience.

But there is a crazy scene where Statham just jumps onto a table to fight the bad guys. Seriously, the action in this film is great.

The Package
We start off our special features with a commentary with Boaz Yakin. For how average his film comes off, Yakin comes off incredibly thoughtful and intelligent about the direction of Safe. He constantly cites Seven Ups and French Connection as influences and talks about making the characters work. You can tell he wants to make something different and fresh, utilizing the familiar and subverting it to make something unique.

Cracking Safe is a small piece about Yakin’s relationship to the story and talks about some of the perks and the pitfalls of the film. Namely, you find out that you can’t have a good action movie without a good relationship at the center of it (that should be common sense) and that it’s really difficult to shoot in New York. You also see a bunch of storyboards for some of the film’s best action sequences, which sets this apart from other tiny featurettes on other DVDs. For being 10-ish minutes, it’s surprisingly substantial as opposed to seeming like a PR piece. They aren’t too self-congratulatory, but they aren’t deprecating on themselves. It’s a realistic look at the production and very welcome here.

Criminal Background talks about the multitude of villains in the film. Basically, Yakin says that every single actor is the best actor for the role and a tiny amount of the character. It’s unusual why they single out the villains for their own piece, but whatever. It’s decent. Plus how many times do you see people praise James Hong on a behind the scenes DVD piece?

Rounding out the set is The Art of the Gunfight, which talks about the action of the film. It basically reaffirms my belief that there are a lot of amazing action sequences in this film and that each one was incredibly deliberate and heightened. THERE IS NO ANCIENT CHINESE SECRET, HUH?