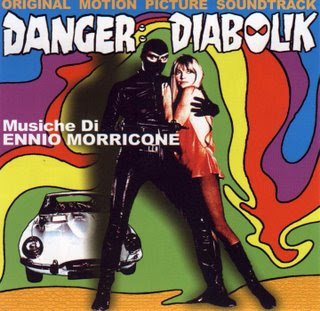 I had only been peripherally aware of the Diabolik character since circa 1999 when Fantomas’ first album was released and talk circulated among Mike Patton fans that A) the band was originally going to be named Diabolik after an Italian pulp character and 2) the album may have actually constituted a sonic extrapolation of themes and images from the comic (called Fumetti in Italy)  and 1968 film of the same name. However, even with this knowledge the character and his various incarnations remained unseen by me until this past weekend, when the same friend who not so long ago lent me Mario Bava’s Black Sunday lent me the director’s Danger: Diabolik. And after all of that time spent on my peripheral how have I ended up taking to the character?

Bava surprises me. I hadn’t realized he was the one who’d directed this far-out, psychedelic capsule of Super Thievery but indeed, Mr. Bava rocked this character into a truly memorable film that captures the pop-culture mores of the time as well as the Italian people’s reactions to post WWII global situations. As comic legend Stephen Bissette points out during the wonderful featurette included on the disc, while America had prevailed and hosted sentiments of success and power (“That’s the American Way!” heard ringing through the population to underline what it was we stood for, acted upon and refused to tolerate) Italy, post-Mussolini, had lost all trust in its leaders and turned instead for their heroes in counter-culture icons such as Diabolik, a super thief who robbed and terrorized the government, not for the good of his fellow country men and women*, but simply to, as Michael Caine’s Alfred would say, “Watch the world burn”.

And burn it does.

At one point a newly appointed beaurocrat begins advertising that the government will pony up a $1,000,000 reward for Diabolik, believing this will prove to out-do the master criminal who thus far has consistently handed the side of law and order their own arses. Not to be outdone Diabolik does what any truly fantastic super criminal would do – he blows up every government building having anything to do with the government, thus crippling them financially and rendering it impossible to make good on that reward, or pretty much conduct any business at all. It’s a pragmatic (if hardly practical) solution to the problem and the not-so underlying message is quite clear:

Don’t fuck with me.

This comes off like the end of Fight Club about thirty years ahead of its time and a situation that would probably NEVER be put into a such a glorious context in cinema today, as it is obviously (and pretty much celebrated as) an act of terrorism, a word that has a decidedly different context in today’s world than it did in 60’s Europe.

Along with some really colorful and groovy action sequences, the best eyebrows this side of Ernest Borgnine (on lead John Phillip Law) and ye another truly WICKED Ennio Morricone score (see below) there’s a nice bent of humor that runs through this one. Take for instance the exaggerated scene in the local crime bosses’ underground club (complete with psychedelic lights, plenty of fringe and one massive hog leg of a joint being ostentatiously passed around by the clubs’ denizens just before the obligatory police raid), where at one point a hippie chick approaches her connection dressed in some kind of dress made from plants – plants that have bottles of Johnny Walker Black Scotch tied to the end of each of four or five dangling vines. New take on the cigarette girl? What a way to underline the excess of the time! Or then there is the government’s reaction to Diabolik’s tax building massacre, where they allow the arch nemesis detective feverishly tracking our hero the entire movie (and being made a fool of the whole time) to melt the country’s entire gold reserve into one 20-Ton ingot, believing this would prevent it from ever being stolen. But guess what?

Wrong again, Sucka!!! Daibolik makes off with the enormous bouty with hardly any trouble.

It’s dastardly and admittedly ridiculous plot points like these, along with the Morricone score and some masterful direction (not to mention hot as hell Marisa Mell) that make Danger: Diabolik a must see for the cinema fan!!!

* Maybe I missed something but it is fairly hard to determine just what country the film takes place in. At first I assumed Italy, however Diabolik’s opening heist of ten million dollars is indeed of American dollars. Then factor in the presence of various ‘Ministers’ and I’m assuming it’s the UK, but still not sure. This of course was probably the intention, but I’m not sure and would love to research the filmmaker’s impetus here.