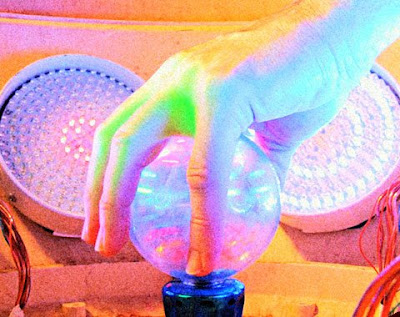 Two years ago Mr. Brown sent me a Christmas package that contained – among many other wonderful items – Christmas on Mars, the long-awaited film made by boundary-pushing musicians The Flaming Lips. Brown and I had discussed this thing’s eminent release for years, and now here it was in my hands. I’m not the biggest Lips fan (but definitely a a fan) but I was excited.

Conceptually I like The Flaming Lips A LOT. And live they are something words cannot describe. To regard them as merely a rock show is a severe injustice*; live The Lips are more akin to a celebration of the greatest assets of being human, and if you listen with the right ears you’ll see that concept is totally conveyed in their music.  Still, for whatever reason the band has never quite hit me the way a band like Ween – who I consider a direct contemporary to The Lips – does. I mean, I like most of their music just fine, go through spurts where I listen to it quite a bit, and conceptually they really rev me up. All this aside though, I often find their records to be less than fulfilling to the promise of their concepts.  And before anyone who is a fan might feel the need to defend them let me say this –  I actually do not offer any of this as criticism – with The Lips I’ve always worked under the assumption that the problem lies with me; that I’m the one who is just not getting it. That being said the band has several albums that have affected me deeply and that I love and after hearing about Christmas On Mars for something like seven years I was pretty darn certain it was going to be a visual and sonic tour de force that would leave me sharply spinning with love and wonder. And it was, except…

The first time I tried to watch Christmas On Mars was shortly after Mr. Brown sent it to me. It was one of those late nights where I was a tad messed up, had probably been up since 5 AM and ended up falling asleep very shortly into it. Yes, visually speaking and sonically speaking the film grabbed hold of me right away.

And then the cast began opening their mouths.

I put the film away for a while after that, the sleepy uncertainty the experience left me with having one of those, “No, I must have been dreaming,” effects and making me nervous to go back and find out for sure. We’d built this up in anticipation and now I was worried – should I wait until some of that deep-seated anticipation winnowed away?

Well, it’s taken a year and a half but I finally have gone back and watched the entire film and again, it is an epic masterpiece in both the visual and sonic spectrums; that I cannot say enough. But the dialogue just ruins the film as it was intended to be presented by the creators and now I am left questioning them.

Now I like to swear, and probably more than most folks. But really, the dialogue here is just – Eh Gads man! I would not be exaggerating to say that every single time someone in the film opens their mouths the wonderful production value disintegrates in a meaningless torrent of ‘fucks’, ‘shits’ and ‘faggots’ or the like. I’m not making this up. It is utterly mind-blowing that someone would take this much love and care into the production of every other aspect and then virtually ignore what the characters are saying. I’ve considered that again, maybe it is me who is missing some obvious statement or technique here, but I don’t think so. It actually makes me think that maybe the guys aren’t all that smart and are really just musically and visually talented.

But that’s hard to swallow from a band with a mission statement and a delivery like The Lips, isn’t it?

I don’t know about you, but when people make music like The Flaming Lips do I guess I just naturally assume that they are intelligent folk. And I’m not saying swearing immediately suggests the idea of ignorance, but when every word out of someone’s mouth is pointless flim-flam greased to the max with cuss butter, well, I start to think they’re working on a pretty low brow scale. Which again, is completely at odds with the evidence of intelligence that would seem to come from people who write words such as those in “Do You Realize?” which, to me, comes pretty close to the level of Pink Floyd’s “Time” in lyrical majesty (“Time” being just about the best lyrics I’ve ever come across** as well as almost preternaturally summing up human existence in a simple, elegant little nutshell). Look at a character like Frank Booth in David Lynch’s Blue Velvet. Booth, played by the late Dennis Hopper, swears A LOT, and has a very strange hybrid of well-dressed low-brow barbarism. At no point during Booth’s “Fuck”-adorned dialogue does either the character or the film feel listless, sloppy or pointless. But every character (except Wayne Coyne’s, who perhaps not-coincidentally does not speak) in Christmas On Mars spews nothing but vulgarity-strewn twaddle and it really becomes embarrassing to sit through after a while. Which again is a shame, because the damn thing was so obviously crafted with love and care.

So what the hell is one to do? I’ll suspend judgment on the intelligence of the band because in writing this I did some research and they still come off intelligent to me. Yet as far as Christmas… I enjoy the film on the aforementioned visual and sonic levels so much that I would like to be able to watch it again. And although the DVD  comes with an accompanying CD of the score, scores tend to be itemized presentations of the music from films they appear in, not properly length-arranged playbacks of the music that would fit correctly over the visual (and that is where a lot of the magic in the film does shine brightest – the juxtapositions of sonic textures and themes over stunning visual images specifically made for those sounds). No, it is almost as if I would have to gather a few friends, go into one of my recording programs and record my own dialogue for the film, then mix that and the score together in appropriate measures, finally syncing it all up for playback – the film in the DVD player and the score in a CD player.

Hmmmm… not unlike The Lips own Zaireeka…

I’m going to do it! I’ll keep you posted (will take some time, lot’s of other projects ahead of this one).

* Whether you’re familiar with everything they play or not I suggest if you ever get the chance you go see them. Brown would go back in like 1993,when Tool was opening for them. He would go and come back and tell me how awesome it was and I would just space. I still regret this. First time I finally saw them live they actually didn’t play – it was late 90’s and they were touring mid-level venues such as Chicago’s Metro doing what was known as the “Boom Box Experiment” where they conducted 50 volunteers from the audience with 50 boom boxes and various preselected musical segments on tape. It was pretty awesome, and it began to give me an idea of what I’d been missing, and to the sheer genius of the band. Genius that, as you read the above pontifications, you will see I am beginning to question***.

** The Smiths’ “The Joke Isn’t Funny Anymore” is right up there as well.

*** This has helped me ease off my disdain; talk about owning someone else’s song: