Microsoft’s Summer of Arcade has been a boon for gamers. Every year they’ve chosen to highlight unique games from smaller developers along with a couple of big name titles, and we’ve always walked away with some of the finest downloadable games around.

2008 gave us Geometry Wars 2, Bionic Commando Rearmed, Castle Crashers and Braid. 2009 gave us ‘Spolsion Man, Trials HD and Shadow Complex. And last year we got the best Tomb Raider game in years in Lara Croft and the Guardian of Light as well as Limbo.

This year the series is kicking off with Bastion, a fantastic little game coming our way from SuperGiant Games. It ran off with a ton of awards at this year’s E3 and the full thing is now available for you to see what the hype is about.

I’m here to tell you the hype is deserved. Solid gameplay, beautiful graphics and a great narrative add up to what surely will be be one of the best games released on Xbox Live Arcade this year.

You play as The Kid, one of the few survivors of an apocalypse known only as the calamity. The world has been literally torn apart, just a few patches of Earth still floating around here and there. The world seems to  build itself up piece by piece as The Kid traverses it. He heads for a Bastion which was supposed to house people in the event of some catastrophic event like this, but there’s no one left but an old man. The old man helps him in his adventure and also provides dynamic narration for the silent protagonist’s journey, as The Kid tries to find survivors and piece the world back together. 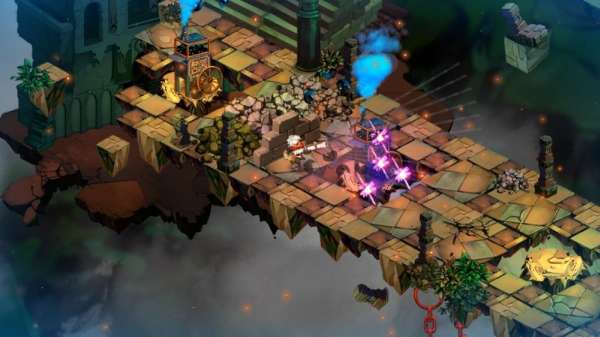 Put aside the visuals and presentation and Bastion is a perfectly competent action rpg.You run around wacking enemies with weapons till they drop currency, exploring the level for the singular exit. Spent your cash and upgrade your weapons. Go to the next level, repeat.

But it’s all about the presentation, and more specifically, the ever-present narration.

Enough cannot be said of The Narrator’s impact on this game. Voiced by Logan Cunningham, whose drawling, raspy voice made me check to make sure it wasn’t Tom Waits, he adds so much flavor to the game. As I wrote before this is dynamic narration, which means that no matter what you’re doing in the game he’s commenting on it. Never repeating himself, mind you- there’s hundreds of original lines of dialogue that describe what The Kid was thinking, feeling and doing at that second. At really gives you the feeling of being told some great tall tale by an old man who’s seen it all and lived through too much hardship.

In the meantime of course you’re smacking enemies with hammers and machetes and shooting them with pistols and bazookas. There are many weapons you will accumulate in the game, usually either of a melee or firearm variety. You can mix and match them however you like and equip one super attack as well. The combinations add for a lot of varied gameplay, and you’ll eventually find a combo that works perfectly for you. Each weapon comes with its own challenge level as well, so you can properly train with them.

One minor fault of the game is in the controls, which make it difficult to line up shots for the guns. Since you’re moving with the left stick and shooting with a face button it’s a pain sometimes to try and aim at enemies while you’re retreating or strafing, which is why most shooters have moved to dual-stick controls. The auto-aim usually means that this isn’t an issue but it’ll happens enough throughout the game to be noticeable.

On a whole though the combat is quite fun and satisfying, and there’s enough enemy variety to keep things interesting and force you to switch up tactics. Plus, if you ever find things too easy you can add idols to a shrine in the Bastion, which prays to various Gods and actually makes the game more difficult in various ways, in exchange for more XP and other goodies.

Fun combat, but the game on a whole is just a joy to experience.

Just look at it in motion and see how stunning it is, and how perfect Cunningham’s narration is.

For 15 bucks, this is a bargain. The game will take around eight hours to complete and when you’re done you unlock a New Game Plus mode that lets you carry over all your weapons and experience to try it again. You will want to, too.

I wasn’t one of the people that fell all over themselves when Braid came out, finding the game’s pretentious and overwrought story got in the way of the excellent gameplay. Bastion represents the perfect melding of story and gameplay, making you feel a part of this genuinely compelling tale.

It just shows you that videogames still have more tricks they can try to immerse you in the plot. Too many times we’re spoon-fed plot through cut-scenes or scripted sequences, numbly watching some asinine story unfold and just wishing we could skip it. It’s so rare to have a game that feels like the story is shaping around your actions, and to actually want to see what happens at the end.

A unique game that deserves a place in your digital collection.