Track of the Week: Omen The composition of a score is one of the most important aspects of filmmakings.  I would fight you tooth and nail if you disprove of this theory.  I’ve been a fan of film scores for as long as I’ve remembered, and this column will be devoted to the film, TV, or video game related tracks that have been playing in my mind for the past week.  So sit back, relax, and prepare for some awesome music.

This Week: “Omen” From the film Kick Ass (composed by The Prodigy)

The Overall Soundtrack: Kick Ass had a very nice soundtrack/score.  Well it’s not something that would make John Williams crap himself, it still worked fairly well in the context of the film.  Kick Ass’ theme is good, and any movie that uses the oft mentioned score to Sunshine deserves some recognition.  Also, The Prodigy is a great band, and the two songs they have here are grand.  Lastly, any score that has “Banana Splits” By The Dickies automatically wins….at everything.

Why This Track: This track just rings badass.  Honestly, I felt this was the only time in the entire film where Kick-Ass the character actually felt like a dude I could respect in real life.  Instead of, you know, a nutjob.  This is, in my opinion, the best scene in the entire film, and this electrifying track really made it what it is.  And lines like “Fuck you, Mr. Bitey” certainly helped making this a memorable scene as well. 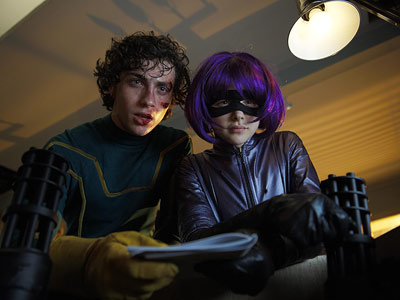 Used When: Kick-Ass encounters a gang of three beating up on a single man and decides to intervene.  The pivotal moment in the film when Kick-Ass becomes a sensation.  Also, one of the best action scenes of last year.

Also See: The score to Sunshine, A soundtrack from The Prodigy, and The Dickies just because you freaking can.

Read more about: Kick Ass, Sunshine, Track of the Week