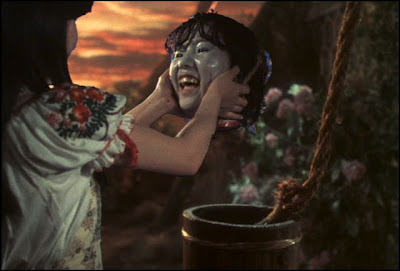 So last night my friend Ray came over and introduced me to Criterion’s edition of the 1977 film HOUSE by Producer/Director Nobuhiko Obayashi. Don’t confuse this with that 80’s House starring George ‘Normy’ Wendt or the sequel with John ‘Cliff’ Ratzenberger. No, I’ve seen some pretty strange cinema in my time but this, let me tell you, but Obayashi’s House is up among the strangest.

If you’ve not seen House the basic plot is this: a teenage girl brings six of her friends to her Aunt’s house out in the Japanese countryside for a visit. The girl, Gorgeous*, has not seen her ‘Auntie’ in almost a decade – it is her deceased mother’s sister and the need to reconnect with that side of the family becomes suddenly strong when her father arrives home with a new girlfriend. The aunt however died alone waiting for her husband to return from the war and instead of moving on peacefully has become some form of evil spirit, apparently waiting in her enormous mansion out in the country for young girls to arrive and act as fodder for all manner of bizarre events at her command.

I should make it clear that although I kind of understood that House was a horror movie from the beginning the first thirty-five minutes or so really undermined my expectations and threw me off that particular trail. It seems what little I have read about this movie all mentions Scooby Doo as some sort of comparison and really, I intend to do the same because it is just so fitting. The film is apparently a product of Obayashi interviewing his young daughter for images and ideas of what scared her and somewhere between his translation of a child’s irrational fears of things like watermelons in wells and pianos and the images of seven Japanese school girls running around an old haunted house and being attacked and dismembered by split wood and pillows and mattresses you will definitely get the Scooby Doo effect. Not only the Scooby Doo effect, but you’ll feel as though you’re trapped with Scoob, Shaggy and the gang in a little Japanese girl’s nightmares – and that’s a pretty bizarre and uncomfortable place to be.

A lot of the atmosphere and Scooby-effect here is induced via the absolute smorgasbord of techniques Obayashi utilizes. As director Ti West points out in an interview contained in the film’s special features, where else can you see a filmmaker use EVERY trick in the book? There’s all manner of non-linear and untraditional editing going on all the time: animation mixed with live action, color saturation and strange lenses, reverse motion and a bunch of other ideas I simply do not have the vocabulary set to list.

And then there’s the soundtrack – fuzzed out, funkified at points and often inappropriately heavy and dramatic the musical cues often surprise the viewer by making you laugh when you definitely feel you shouldn’t be. Soundtrack anyone?

House is something special – it’s no wonder there is a Criterion Edition because I’ve simply no other film to compare it to. It is a superb art-film horror movie from an age where the idea of horror-as-art had gone a little overboard and become a bit of a joke. But this, this is truly something and it’s obvious it has influenced some of the filmmakers, such as West, who take an artistic approach to horror today.

* Yes that’s her name. Her friends also have strange and descriptive
names such as Kung Fu who can fight, Prof. who is the smart one and
Melody who plays (and is eventually eaten by) the piano.