GAME OF THRONES – “THE HOUSE OF BLACK AND WHITE”

The women of GOT are out for blood in “The House Of Black And White”.  While Brienne racks up the biggest bodycount, the title refers to the headquarters of the Faceless, where Arya is beginning her apprenticeship in the arts of nothingness.  Of course, she already has a head start on becoming a murderess, as while she only crosses off a pigeon this week (though in ruthlessly efficient way that demonstrates how much more formidable she’s become since we saw her chasing them in the first season), her list of names has gotten noticeably shorter – just Cersei, The Mountain, Walder Frey, and Meryn Trant. I’m not sure how Roose Bolton and Ilyn Payne managed to slip off, but that should still be plenty to occupy her for a couple seasons.

The return of Jaqen is welcome (because obviously) as is the added glimpses of Braavos, probably the most intriguing corner of this world that has gone largely unexplored. You can tell it’s new because the theme music when entering is surprisingly jaunty from a show whose normal musical palette varies between ominous and straight up dirge. It contributes to a different feel from anywhere we’ve been, but with a scale and look that is better realized than Astapor or Qarth; the season’s increased budget is perhaps more noticeable in the dragon effects, but since those scenes haven’t thus far added up to much in story terms, I appreciate it more when it’s building out the setting. 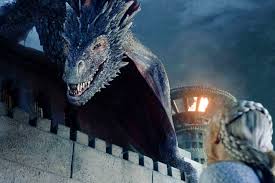 Another corner we visit for the first time is the oft-discussed Dorne, where Ellaria is agitating for vicious retribution against the Lannisters for Oberyn’s death. She is shut down for now by Oberyn’s brother Doran, for whom inaction seems a way of life. Though the wheels on his chair suggest that he’s not going to be challenging the Mountain to Round Two any time soon, it seems deliberate that the guy barely tilts his head throughout the entirety of a rather charged exchange. He won’t be able to remain passive for long, however, as the most promising development involves Jaime recruiting Bronn to come and steal Mycella back from the Martells. WHOA!!! Calm down there, big guy

Jaime and Bronn on the road promises to be great (I was typing “I hope he takes Bronn” in my notes before it cut to him skipping stones with his drippy betrothed), as they have the biggest abundance of personality of anyone left in Westeros, and a high chance of swordplay to boot. But Jaime and Doran create interesting parallel figures. Two heads of great houses, cripples who recently lost a brother, resisting the efforts of bloodthirsty women in mourning black to push them into acts of war. If they ever get a chance to actually talk, they might just find that they have a lot more in common than they are supposed to. When Brandon Stark makes it back south (which apparently won’t be this season) to find that he has inherited the title King Of The North, they could set up a ruling council of cripples, bastards and broken things, without even inviting Tyrion, Varys, or Theon to the party. “Not even get a mention??? That’s such…it…that’s fair. I mean, I can’t even remember my full name at this point.”

Or Jon Snow. That bastard gets his greatest wish granted, his father’s name, and the chance to rule the North in it*. But he’s too much a Stark to actually be a Stark, not when it would mean breaking his vow to the Night’s Watch. But even if he’s not Lord of Winterfell, he is the new Lord Commander of the Watch, in a twist that I can’t believe I didn’t see coming at all. Following a rousing stump speech (which goes delightfully negative on the useless Janos) by Sam, Jon is suddenly catapulted to a position of power that has the potential to put him even more at odds with Stannis than ever. Things at the Wall are happening at a faster clip than they ever have before, and along with the addition of Stannis’s crew and Jon’s increased self-possession, it has made that, if not my favorite part of the show, at least pull ahead of the stuff in Mereen.

Over there, Barristan convinces her not to give in to her genetic bloodlust, but she ends up having to take the head she didn’t want instead of the Harpy’s she did. He unknowingly echoes the same thing that Bronn tells his fiancée, which Jon also suggests to Stannis: cruelty may be a tempting way for a ruler to maintain control, respect, or at least the feeling of the same, but it has a way of breeding as many enemies as it suppresses. Bronn may not really believe in the crude form of karma he describes, but even in a world where nobility tends to breed decapitation, meanness does have a way of coming around.

Now if it would just come around faster. Is it Sunday yet?

*I know the theory, not going to discuss it until it comes up in the show