Does The Joker Have An Extra, Hidden Appearance In THE DARK KNIGHT?

So this is one of those things that I’m pretty sure I’m not buying, but it’s just intriguing enough to throw out there. Also, I’m absolutely awful with faces (to the point that I think I have some degree of that Milla Jovovich prosopagnosia thing), so I tend to defer to others on things like this and Christopher Reeve’s possible Man Of Steel cameo.

So, all that said, does the Joker have an extra scene in The Dark Knight that none of us have ever noticed?

Circling around right now on Facebook (via a cheesy geek meme page) is the photo, which claims to point out Heath Ledger without make-up in the dinner scene between Bruce, Rachel, and Harvey about 25 minutes into the movie. Now the grainy picture was enough to make me wonder, so I busted out an HD digital copy and snapped some (admittedly still shitty) photos. Perhaps some screenshots are available from someone with a Blu on hand? 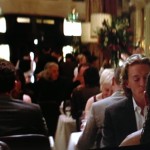 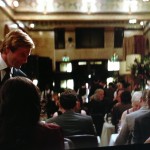 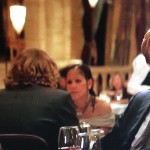 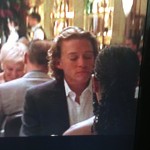 It seems to clear to me that is not Heath Ledger with his scars, though it’s a dude who definitely resembles him. We see The Joker without his make-up and he still has obvious scars, which this guy appears not to have.

Again, I’m awful with faces, so maybe I’m wrong. I’m seeing a ton of very smart people seemingly blown away by this. I just don’t quite think that’s Ledger, but a similar guy with similar hair. The reason that this is worth pointing out that is that even if it’s not Ledger, in a film like this every single element is specifically chosen. So somebody somewhere made the decision to bring in what is effectively a stand-in for The Joker to be close in this scene. (FYI, the pencil scene immediately follows this one.)

So whether it’s the casting director’s little out-of-focus foreshadowing wink, or a hidden decision that is just now coming to light, I promise you’ll never again watch this scene without darting an eye and pointing it out to your friends…

Let me know what you think down below.

Thanks to Justin Clark